Its coming up to the ever popular Yulin Dog Eating Festival. While the vast majority of you might find eating dog hard to swallow. But ask yourself what is the difference between eating a dog or eating a lamb?
I have asked this question to many people and the response is "you don't bring lamb into your living room and pet it". Maybe not a lamb, but in India they prize cows as being Holy. This a valid enough answer. However, if it wasn't for the Egyptians we wouldn't have domesticated dogs. If you think of it, domesticating a dog is purely only for the selfish needs of humans. Should dogs be allowed roam free instead of giving them treats to roll over or smack them on the nose for going for a pee in your kitchen?

Taking away the fact that humans made dogs domesticated and people love them because they are small enough to live with humans in a house. Again, ask yourself what is the difference between one animal meat to another animal meat? Im going out on a limb here and  the answer is absolutely nothing.
When you see the millions of cows slaughtered each year for human consumption. The millions of lambs slaughtered for human consumption. The millions or even billions of chickens kept in awful conditions and slaughtered for human consumption. How is that any different to the killing of any other animal? It's not. Just because you see them as domesticated pets, on the other side of the world they are seen as animal protein. If there was a steak festival nothing would be said about it. A hamburger festival. Again nothing would be said.

Before you say "You must be a vegan". No I am not. I tried it and it felt horrible. What I am is a weekday vegetarian. Not because I think animal killing is cruel (which is kind of is seen as we don't actually need animal flesh protein to live), but because I feel healthier doing so. Plus, if you look at the amount of carbon waste derived from the feeding, killing, transportation of animals for human consumption is astronomical. If everyone ate like a weekday vegetarian it would have a bigger impact on global warming then if everyone changed to a hybrid car.

Anyway, each country has their own delicacy. For example, Iceland eat puffin. An extremely cute little penguin type of a bird that looks like the creators of Happy Feet took its idea from. They eat puffin as a way of culling the vast population of puffin in Iceland. You never hear about that do you? 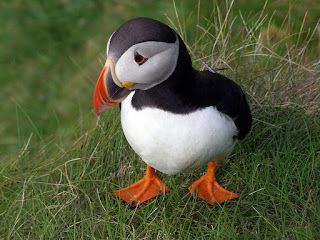 Balut is a developing duck embryo that is boiled while its still alive, cooked to death and then eaten from its shell. You never hear anything about this. 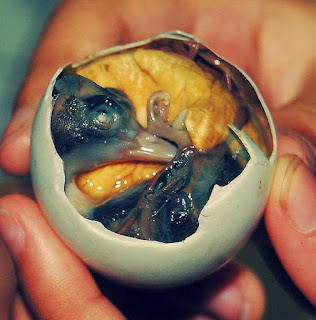 You might have heard of Foie Gras. Maybe not. Fear not, I will explain! Foie Gras translates to Fatty Liver from French. Why? Because either the duck or geese is force fed grains with extra fat by a long metal pipe that is stuffed down its neck until the liver reaches nearly 6 times the normal size. Basically giving the bird Cirrhosis of the liver. This picture isn't photoshopped. This is actually how the process is carried out. 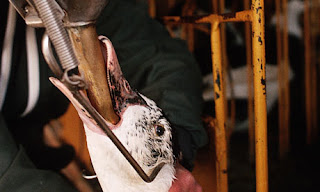 Wait, you only have to read two more paragraphs on why every animal is equal and all of a sudden you have a heart about how animals are killed.

This next one involves chickens. Instead of just killing a chicken by either breaking its neck or sending an electrical current through its body, the "chef" opens a live chicken, cuts out the intestines and stuffs it with herbs and spices. Sews the chicken back up and then wind blasts the chickens while they hang upside down until they are dead. 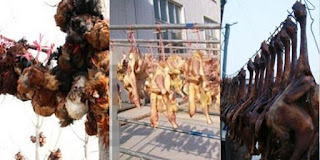 Lastly, but not as important as the other above. Fresh Donkey. This involves cutting the donkey open and taking parts of its flesh off WHILE ITS STILL ALIVE. If thats not enough, boiling water is poured over the donkey to cook part of the meat WHILE THE DONKEY IS STILL ALIVE. This is repeated until there is no donkey left and the donkey presumably dies of the amount of pain it has been put through. I won't post a picture of this because it doesn't really look right and i presume you get the gist of it so instead, i have decided to show you a lovely cute picture of Eeyore. 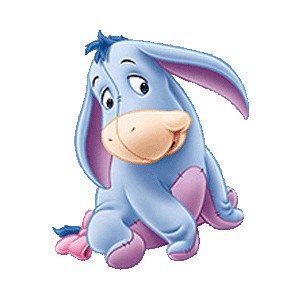 My post isn't to intend to shock you into being a vegetarian. I just want to illustrate that what is normal for the spider is chaos for the fly. Meaning, just because you see it as a pet, others see it as a source of protein that they might not be able to source. Of course times have changed and you can source different animals across the globe. But traditions won't die just like the tradition of drinking in Ireland won't change but it still causes so much problems psychologically and physiologically.
Personally I don't see a difference in any animal being killed for human consumption. It's not exactly peaceful no matter how you view it.