Before you read this, take a look at the other 3 parts.


So, the world of Cystic Fibrosis is slowly coming around to the links between nutrition and our illness/disease.
Fibrosis means the thickening and scarring of tissues. Or you can look at it as an inflammatory response to our body. Im not sure where I am going with this, but I thought it might be interesting.
Anyway, like I said last year, and years before that. Eating crap food no matter who you are will result in your body functioning crap. We are no different. If you fill yourself with Haribo and Lucozade, you will be getting no nutritional value from it and it will actually be an anti-nutritional food. Meaning, it does more harm then good. 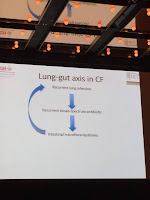 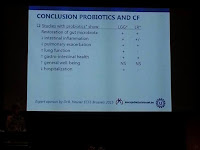 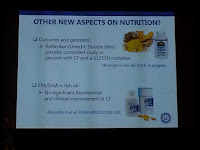 I will try get the full slides and narrow the information down.

GINSENG
There are a few different versions of Ginseng.  Depending on your body composition from a Chinese Medicine point of view, (Yin or Yang), then you should determine which Ginseng to take. I won't get too into Chinese Medicine here, but i will give you the information.

1. American Ginseng
This version is the least effective on the QI (energy) out of the 3 Ginsengs. However, this type of ginseng is good for coughing up blood, or if you have a fever, as it is cooling. It would also be good for someone with menopause.

2. Panax Ginseng
This ginseng is the in between ginseng. It generates fluid in the body, and has a calming effect on the body. I think this is the most available Ginseng. But just make sure it is this you are getting as each ginseng has different effects. However, i think this one or the American one can be good in the treatment in CF, and the studies don't say which ginseng they used apart from the one listed below.

3. Korean Ginseng
This type of ginseng has the strongest effect. This doesn't mean it is the best for you. If you have too much heat in your body then this type can make you worse. However, because CF is a damp condition (produces more phlegm) then this could be the one to consider. But if you have an infection or have a temprature, then maybe use the American Ginseng.

SCIENTIFIC STUDIES ON GINSENG
A study with CF and Ginseng from 1997 shows that it can be used to significantly improve in the treatment of  Pseudomonas A in only 2 weeks. (1997 Study on Ginseng and Pseudo)
The second study was from 2011. This study shows that Ginseng can be used to eradicate the biofilm associated chronic infections caused by P. aeruginosa. (2011 Study On The Eradication of the Biofilm in Pseudo A).
This this study shows the same reaction to Pseudo with the treatment of Ginseng but it states which type of Ginseng that was used. Which was the American Ginseng (2014 Study on American Ginseng for Pseudo)

TIPS
If you are taking a lot of caffeine in the day then i would reduce the amount you take, if you are going to start with Ginseng. I would also take ginseng in the morning, as it can have an effect on energy levels and insomnia.
If you are on Insulin then be careful as it can speed up the metabolism.

FURTHER READING
Because Panax ginseng is probably the most popular, and the study above shows that it was the Panax variety that helped with Pseudo. Read the link for further info (Uses, Interactions, Dosage on WebMD)

PERSONAL EXPERIENCE
I haven't been on ginseng a long time, and i haven't had a sputum done in over a year. But once I am home, i will get a sputum done to see if there was any change in my Pseudomonas A. I am only speaking from experience, and with scientific studies on Ginseng, i think it gives a convincing case.