One of my passions in life is fashion and style of both clothes, furniture, art and practically anything that can be designed.
I visualise a lot of words. For instance, if someone mentioned something gruesome, I instinctively imagine what it would look like.
I love people watching. I would sit for hours at a cafe on a road side or square while watching the world pass by and the people with it. I enjoy waiting at an airport and look at what people are wearing and what made them choose the outfit. I also judge people on their footwear. A clean pair of shoes or kicks (runners, sneakers, trainers) can really tell a lot about a person. Which leads me onto my next topic. Footwear. I love everything about footwear. I plan an outfit around my footwear. And I love the fact that I am a consultant Physical Therapist and Strength & Conditioning coach for a Nike funded group!
People drink their money away in nightclubs and pubs each weekend. Which i don't mind. I'm not going to give out about that. Whereas I save up and buy the latest footwear. I find nightclubs boring. I would much rather sit in with a cup of tea or go out for a nice meal with friends or Yaz and have a conversation. You can't talk in a nightclub. You shout one liners at people. That's not my cup of tea.
Back to the subject in hand. Fashion/style. According to my Mam, I was brought to the shops aged 4 to pick out my own pair of shoes. I was so fixated on these red boots. I can still remember the boots exactly. I was so delighted with them. I think wanted to wear shirts all the time and wanted one of each colour, which is practically impossible. That was when I was about 6-8.
Unless i am in work or going training, I rarely wear track suits. I would much rather dress up in a shirt, chinos and a fresh pair of shoes or kicks (sneakers, runners, trainers). The only thing holding me back from wearing smart clothes in work is that it's very hard to massage people in restrictive clothes.
I often visit online clothes shops and blogs such as Topman, ASOS, and Mr Porter from example (I don't buy from that one!!!). I could look at women's fashion sites and get the special edition of Elle each fashion season.
Like I said, the way a person dresses tells a lot about a person. You judge, even if you don't think it. I judge everyone I look at. I think everyone does. I judge, but then my judgement can change after talking to that person, and it mostly does change. But first impressions really does apply with me.
Here's a picture of my most recent pair of kicks. Nike Roshe Run Mid "City Pack" NYC. I think I have over 100 pairs of footwear, and that's not including my running shoes. They just get mucky so I don't bother counting them. 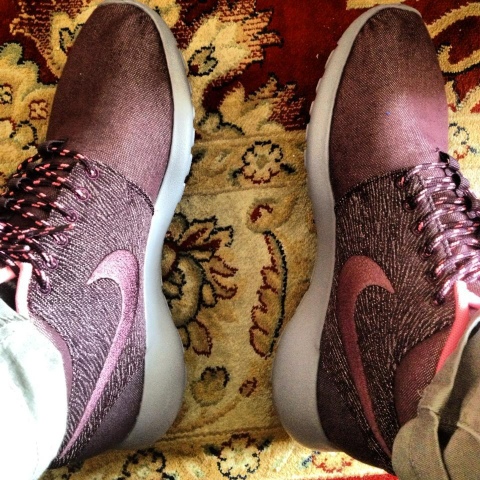