For the past few years Yas and I have wanted to go to Taste of Dublin. This year I was home during the time it was on and we happened to get free tickets. Jammy!
To buy the food you need to have tokens, they call it Florents or something along those lines. We asked how much they would recommend us buying. €40 between us they said. So we bough €50. Id say within 20 minutes that €50 was gone. Was it spent on good food? No. Our lobster roll, which was more like a glorified dinner roll with a tasteless amount of lobster. That cost €9!!!! The oysters were nice in fairness. Everything else was mediocre and the price didn't reflect the quality or the quantity. I don't mind paying money for something that will blow my taste buds away. If the lobster roll was €20 and tasted unreal then I see that as money well spent. The only memory I have of this was the fact it cost €9.
€50 spent and we didn't even have a drink. We had to spend another €20 just to get a beer and a cocktail.
So €70 down and we were still hungry and thirsty. We decided to leave and get a proper lunch. Yas wanted to try Balfes (www.balfes.ie). I never heard of it and because it was attached to the Westbury, i just had this idea that it will be overpriced mediocre food. We had tuna tartare and oysters for mains, which was lovely. The bread was a bit meh. I had a pink pepper grilled pineapple with vanilla ice cream and Yas got a parmesan cheese cake. I was surprised that it was nice, although I think it would be better as a starter. Yas loved it (sure thats all that matters!!!!).
We were still hungry when we got home. Savages! So I rustled up something quick and started season 4 of Orange is the New Black. You can't sit through the opening credits of O.I.T.N.B without doing a stupid dance. It doesn't feel right! 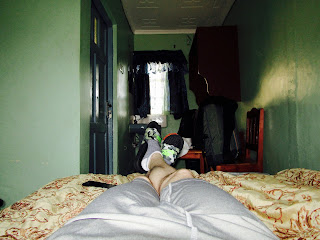 I woke up today and had a definite answer to whether I should go away to the Olympics and be away for the rest of the summer. I missed having Sundays with Yas and continue on our #IrishFoodQuest! I have been trying to decide what to do. I have had enough of living out of a suitcase and staying in some very questionable accommodation
(and thats not me being a diva) over the last number of years. The picture on the left isn't the worst picture. Dirty water coming up through a hole in the ground and live wires hanging from the shower are examples.
I am going to stay home and spend time with my family and Yas. There is no hidden meaning behind this. I would just rather watch the Olympics on the couch with a nice pot of tea and maybe a raspberry swill roll. How can you beat that??!!