Before I go on in detail, I will explain about this little boy called Finn. This is Finns year so far. 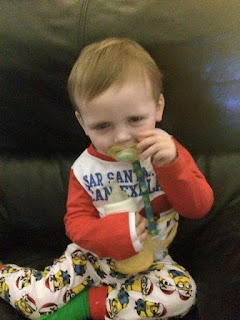 - 27 courses of oral anti biotics- 11 chest x rays- 4 courses of IV anti bionics (3 times a day)- 4 weeks of being on oxygen
- 3 weeks of being on a feed directly into his stomach (to get the required amount of nutrients, vitamins and minerals in per day)
- 38 times of attendance to hospital
- 3 pneumonia
- 2 lung collapses

Below is a link to the Joe Duffy Liveline about the new drug for CF.
Joe Duffy - Orkambi

Now for the stats..
Enda Kenny had a lot of positive words to say about the services for CF.

Here is what he thinks are great services.
In Dublin alone;
•20 CF designated beds in Vincent's with an extra 14 beds that are given to other people if needs be.
•6 CF designated beds in Beaumont with no extra beds if needs be.
•There is just over 1200 people with CF in Ireland. The most densely populated in the world yet we don't even have enough CF beds for 10% of the population nationwide.
Furthermore, here is a list of how Orkambi will;
•reduces hospitalisation by 40%. That alone saves money on the tax payers and the government.
•It increases weight which reduces the amount of night feeding treatment, and other weight gain supplements that people with CF will have to take.
• It increases lung function which can help people with CF participate in the real world, getting jobs and contributing to the work of the country.
Never mind the cost of the drug, it's about saving lives of Ireland's biggest genetic disease. We should be leading the world in treatment and services for CF not waiting on what other countries do.

The Government has said we don't have the money to fund Orkambi. The same government is to spend 60 million Euro on changing the speed limits on the m50 - a 45km motorway that acts like a carpark.
Furthermore, Also, it has been announced that the government will increase the grant for Horse Racing Ireland from €54.4 million in 2015 to €59.2 million in 2016.
But we are told that there isn't enough money to fund a life changing drug to people with CF.

If there is not enough money to fund Orkambi, lets look at how much is spent on treating another condition that is entirely treatable with diet and lifestyle, and a condition that is on a drastic rise which effects the government and the tax payer.
Type 2 Diabetes.- 10% of the Irish Health Care budget spent on diabetes – €1.35 billion annually. - 95% of Diabetes in Ireland have Type 2 Diabetes. - But here is the funny thing. Cystic Fibrosis is a condition that can result in CF Related Diabetes (or CFRD).

The government spent some 27 million on postcodes in Ireland. POSTCODES!!!!

If the Minister of Health Leo Varadkar had CF, he would statistical be dead. He is 36.
We know how fast and high he, or Enda Kenny would be jumping if one of their family members had CF. But they don't, and that exactly why us people with CF are just another statistic.
Posted by Evan at Thursday, December 17, 2015