We went for the 6 Course "Surprise Tasting Menu". There was no surprise it. I'm not surprised it has lost its Michelin Star. The menu is dated and lacked the taste that the reputation of the restaurant accredited.
The amuse bouche was the nicest thing about the menu and it went south after that. However, the amuse bouche was counted as 1 of the 6 courses. That was a bit cheeky.
Second course was a goats cheese, beetroot, and yellow pepper puree. This was nice, but I'm not sure why it was served on a slate.
Third course was by far the worst of the night and one of the worst dishes I've had in a restaurant in a while. I didn't finish it. It would have been expected on a menu for brunch about 2-3 years ago. A huge bit of black pudding which wasn't anything special, on a bed of mushy peas, and a hard poached egg. How can a good restaurant serve a hard poached egg? The peas lacked creation. Not even a bit of chopped up mint thrown in.
Fourth course was mediocre. The beef was cooked well but serving prawns with a red wine jus, mash potatoes, and some sort of black pepper sauce just didn't make sense and didn't complement one another at all. Again, the yellow pepper puree appeared on the dish.
Fifth course was a deconstructed cheese cake. I don't understand deconstructed dishes. Just serve it the way it was meant to be. The cream cheese tasted similar to the goats cheese from the second course but with a bit of sugar to make it more of a dessert. Digestive biscuits crumbled up was a bit hard to keep on the slate.
Sixth corse was a chocolate and peanut butter brownie with coconut ice cream, and again a few crumbled up digestive biscuits. Nothing either amazing or bad about this. It was just ok.
While the photos look good, they don't deserve to be in a restaurant with this reputation. I would have expected it to be served in your local family restaurant.


Anyway, the company of my girlfriend made the night. The food was just a happy go lucky night out. But maybe I just had too high of an expectation. 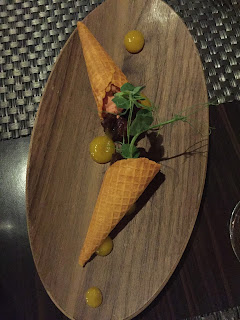 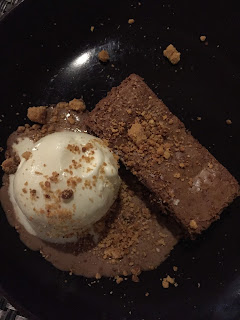 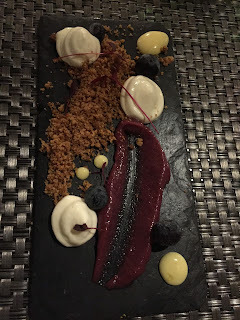 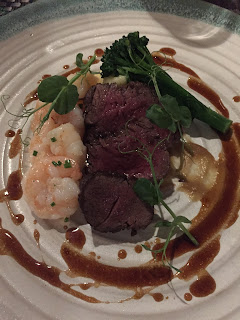 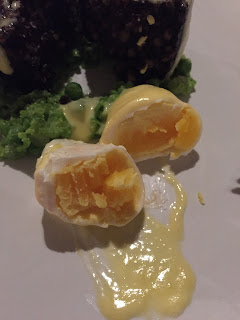 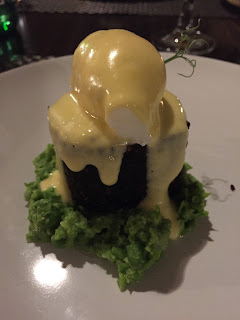 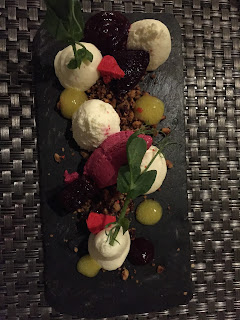